Jerusalem: Foundation of the Knights Templar

In AD 325 workmen in Jerusalem, working under instructions from the Emperor Constantine to clear the holy sites, uncovered under a pagan temple the grave of Christ. Over this empty grave Constantine built a round church, an imperial mausoleum: the Church of the Holy Sepulchre. Christ’s grave, a low cave, is at the circle’s centre. In Christendom, Jerusalem is the centre of the world; the Sepulchre, site of Christ’s own burial, is the very centre of the centre of the world. 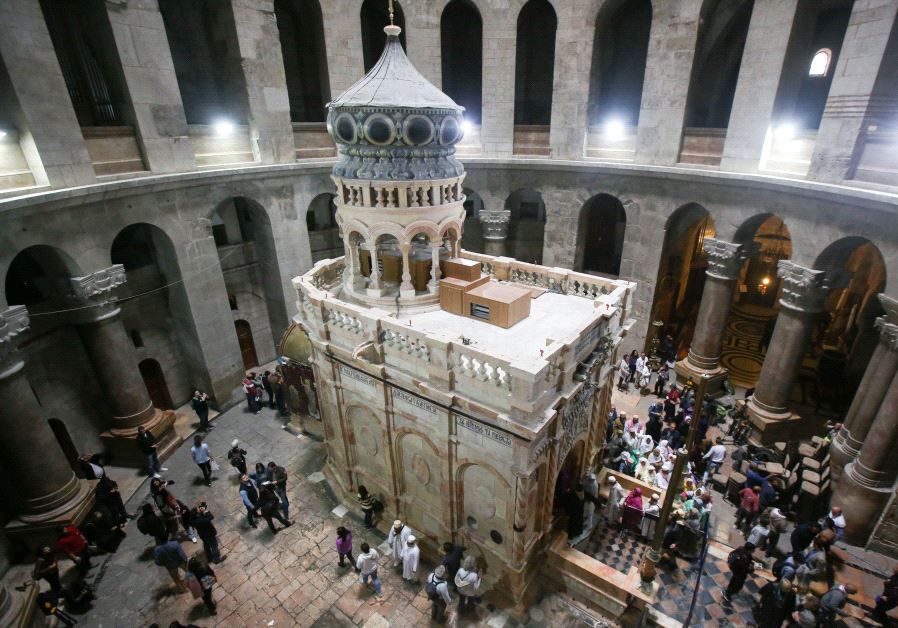 The Templars were founded in 1118–19 by a knight of Champagne, Hugh of Payns, who led a group of his fellow-knights in the classic monastic vows of poverty, chastity and obedience and in a fourth vow, to protect pilgrims in the Holy Land. The Templars were given as their headquarters the Aqsa Mosque on the Temple Mount in Jerusalem, believed by the crusaders to be the Temple of Solomon; so they became known as the ‘fellow soldiers of Christ and of the Temple of Solomon in Jerusalem’, or Templars. Aligned with the Mosque’s axis is the Dome of the Rock, the beautiful domed octagon built by the Muslims in 691 to surpass the Holy Sepulchre’s rotunda. This the crusaders believed to be the Temple of the Lord, in which Jesus was presented to the Lord at the first Candlemas. 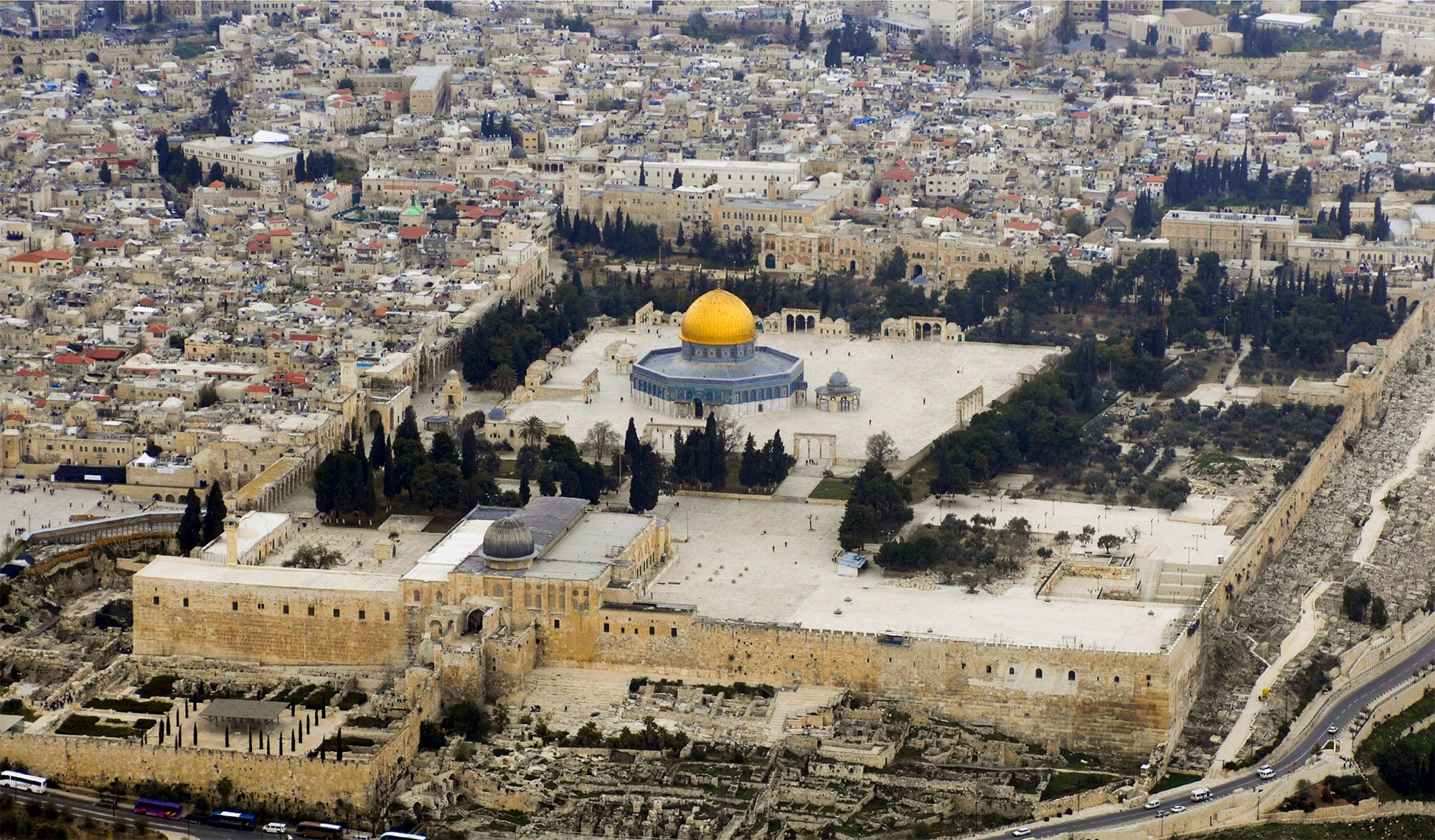 The Dome of the Rock on the Temple Mount of Jerusalem.

At their foundation the Templars were deeply suspect: it was unnatural for one man to be soldier and monk together. But they won the support of Bernard of Clairvaux; and with Bernard on their side, they swept through Europe. They had a house in London by the 1140s, a mile north of the present ‘New’ Temple; there too they built a round church.

Our present Round Church, in the Templars’ New Temple, was in use by 1163. Such rounds recreated the shape of Constantine’s memorial and thereby the sanctity of the Holy Sepulchre itself. When we are in the Round, we are, to the medieval mind, at the centre of the centre of the world.

Temple Church, interior of Round 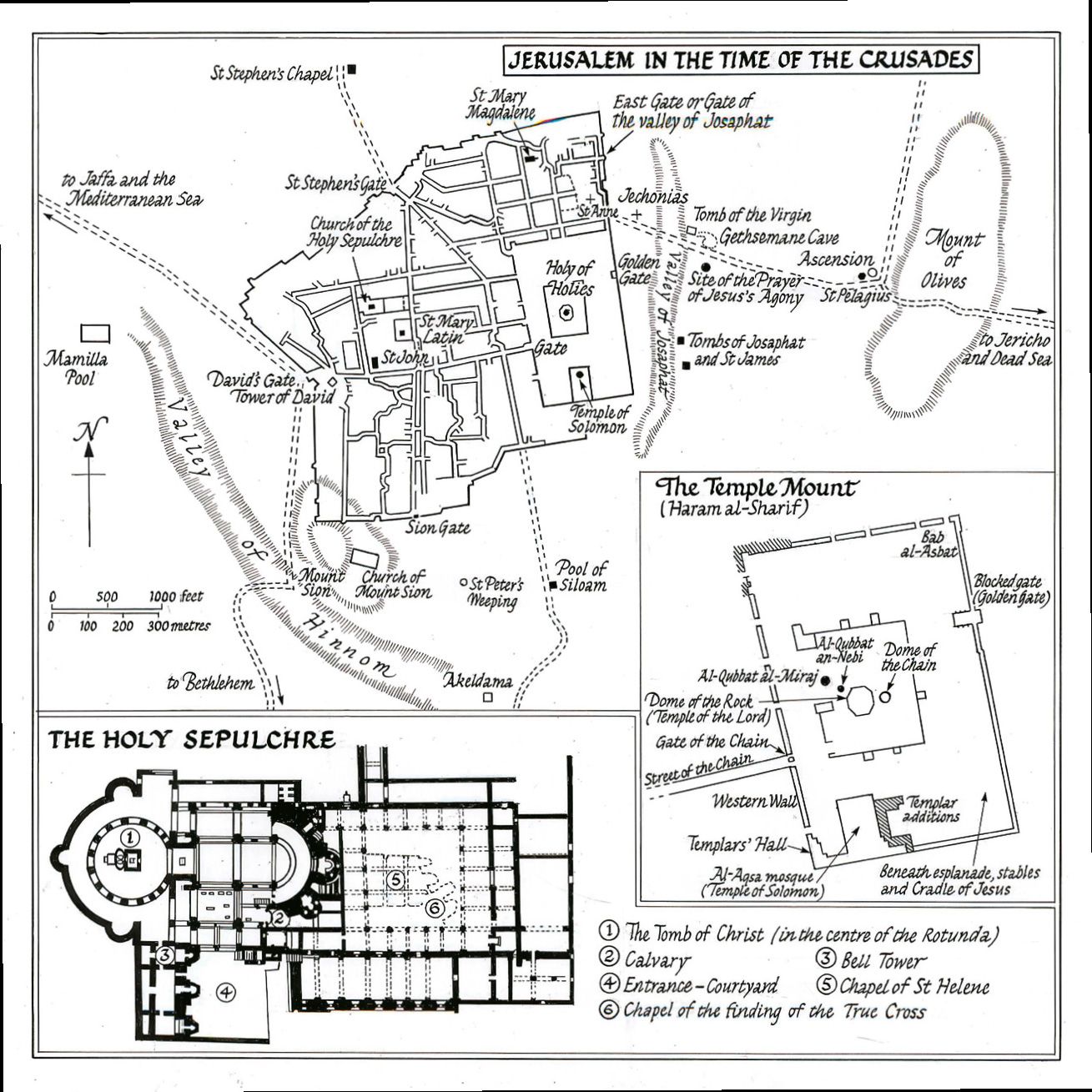 Jerusalem in the time of the crusades

Bernard of Clairvaux, writing in praise of the Templars, meditated on the Holy Sepulchre:

Of all the holy places, that which in some way holds the first place, which one desires to see the most and where one feels (I can hardly describe it) a redoubling of piety — is the place in which Christ rested after his death, rather than those in which he lived. The thought of his death — even more than the thought of his life — reawakens our piety. The life of Christ tells me how I should live my life; his death buys me back from death.

“Know ye not, that so many of us as were baptized into Jesus Christ were baptized into his death? Therefore we are buried with him by baptism into death: that like as Christ was raised up from the dead by the glory of the Father, even so we also should walk in newness of life. For if we have been planted together in the likeness of his death, we shall be also in the likeness of his resurrection” (Romans 6. 2–5). What happiness for these pilgrims when, after the numberless fatigues of a long voyage and a crowd of dangers to which they have seen themselves exposed on land and on sea, it is at last permitted them to rest just there where the body rested of the Lord! It seems to me that, in the overflow of their joy, they no longer feel their tiredness and count as nothing the costs of their voyage; but, as if at last they have obtained the recompense for their pains and have won the prize for their race (to use the very expressions of Holy Scripture), they are flooded with happiness at having reached the tomb of the Saviour.

St Bernard of Clairvaux
In Praise of the New Knighthood (The Knights Templar), ch. 11.

To that cave in Jerusalem the women came before sunrise on Easter morning. There they found the tomb empty; there the angelic proclamation frightened, awed and inspired them; there — and so here, in our Round Church — the risen Jesus, as the sun rose, greeted Mary Magdalene by name.

In the East, Constantine’s Church is named not for Christ’s burial but for his rising from the dead: the Church of the Anastasis or Resurrection. In the Anastasis, at the ancient Ceremony of the Holy Fire, the torch of Easter takes fire in the Sepulchre of Christ on the afternoon of Holy Saturday. The fire is passed from candle to candle from the cave itself and throughout the Church. Within minutes the Anastasis is ablaze with light. As at every Easter for over 1,000 years the Holy Fire dissolves the darkness of death and illumines the world with the light of Christ.

Over 1,500 years after the Empress Helena was in Jerusalem, General Gordon, British and Protestant to the core, did not like all the superstitions of the Sepulchre and its sects, and to his great satisfaction discovered another tomb, half a mile away in a gardengrove, which he declared to be Christ’s real sepulchre. He wrote to Queen Victoria, to tell her of his discovery. Her Majesty thanked him in reply, but said, ‘We are content to accept the discovery made by our cousin Helena.’ The Garden Tomb continues to attract pilgrims and visitors. 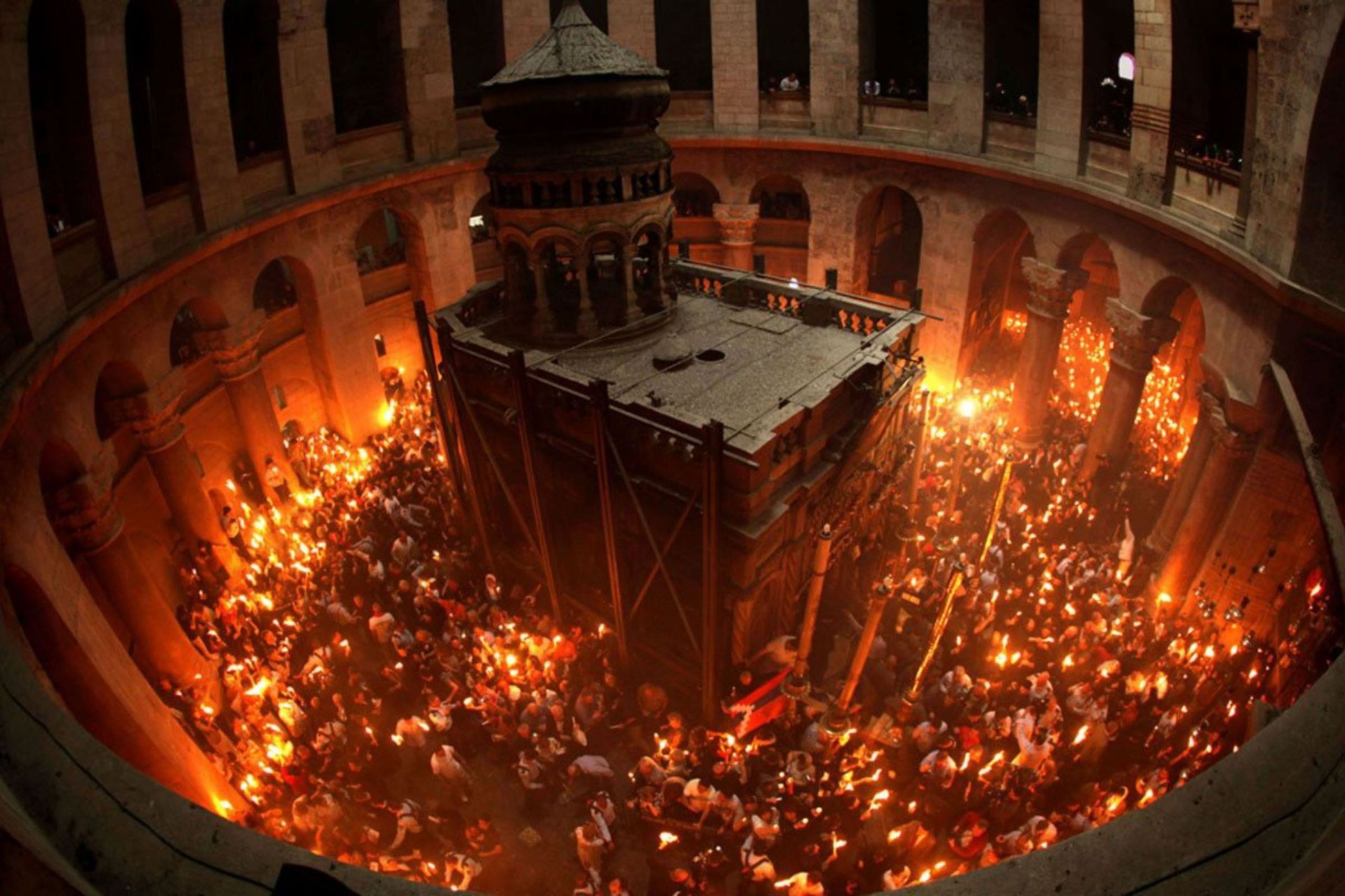 For information on Bernard of Clairvaux, please click here

The Templars in London (Holborn)

The Templars’ first house in London was in Holborn, a mile to the north of the present ‘New’ Temple. There too the Templars had a round church.

The Temple Church in use

The Templars sold their whole Holborn site in May 1161; they are likely, then, to have had a church ready to use at their New Temple. Geoffrey de Mandeville was buried ‘in the porch before the west door of the Temple Church’ in 1163.

The Round Church may be the earliest Gothic building in England. The original Chancel was smaller than today’s: it was one bay wide, three bays long. The Church overall would have been seen as a large round nave with small chancel. (The new Chancel of 1240 changes the balance between the Church’s two parts: they are now most naturally seen as a large chancel with an unusual round ante-chapel or narthex.) The Church will always have been simple and clear in design; the Templars were heavily influenced by Bernard of Clairvaux and Cistercian austerity. But today’s absence of almost all decoration is modern. In the Middle Ages there were lozenges of bright paint on the walls, colour on the carved heads, metallic plating on the ceiling to reflect the candle-light and banners hanging down the columns. The profile of the Round’s original roof is tantalizingly uncertain: the rotunda of the Holy Sepulchre in Jerusalem had then and still has a steep pepper-pot roof; our Round’s corbels may — or may not — have been strong enough to support such a structure. A rood-screen divided the Round from the Chancel; on the Round’s side was a nave-altar. The Chancel, with the high altar at the east end, was for the use only of the Templars’ priests, in their celebration of Mass. The brothers would have been confined to the Round. The Round will have been used as the chapter-house.

Consecration of the Temple Church

The Temple Church was consecrated in honour of the Blessed Virgin Mary by Patriarch Heraclius of Jerusalem on 2 or 10 February (Candlemas) 1185. The date was determined of course by the timings of Heraclius’ visit. But Candlemas is, at the very least, suggestive.

The Templars’ headquarters faced the octagonal Dome of the Rock, supposedly the Temple of Christ’s infancy, to which Mary had brought the infant Jesus at the first Candlemas. The Christians’ most sacred site was the round Sepulchre, the place of his burial. The whole span of Christ’s earthly life was encapsulated in these two buildings. From his mother’s womb to his own tomb: the only two containers on earth of the uncontainable Lord. And at Candlemas 1185 Heraclius dedicated our own Round to the Virgin Mary who had brought her infant son to the Temple and who would watch his death and burial just half a mile away at the site of the Holy Sepulchre.

We must wonder how reverberant were the echoes of both events and both buildings in Jerusalem in a Round such as ours:

The sepulchre of Christ is like a womb; from there he is born more glorious than he was from his mother. Blessed is the body of our Lord Jesus Christ given birth by virginity and guarded by the justice of Joseph of Arimathea. For Joseph’s grave guarded it without corruption, just as Mary’s womb preserved it unimpaired. Everywhere sanctity is conferred on the blessed body, and everywhere virginity. A new womb conceived it, a new grave enclosed it. Therefore the womb that bore the Lord is virgin, and virgin is his sepulture.  Or rather, the sepulture itself is a womb. For just as the Lord emerged alive from his mother’s womb, so he rose alive from Joseph’s tomb. Except, that this second nativity is more glorious than the first. The first brought forth a mortal body, the second an immortal.
After the first he descends to hell, after the second he returns to heaven.

Heraclius was in London as part of a delicate and vital mission. King Baldwin IV of Jerusalem was dying. His kingdom was riven by factions and under threat from Saladin. He had drawn up in his will the rules for the succession: if his sickly nephew, due to become the child-king Baldwin V, were to die before the age of ten, a new ruler should be chosen through the arbitration of four potentates: the Pope, the Emperor Frederick Barbarossa, the King of France and Henry II of England. Late in 1184 a deputation headed west from the Kingdom of Jerusalem: Heraclius, the Grand Master of the Templars and the Hospitallers’ Grand Prior. They visited the Pope, Frederick, Philip II Augustus — and finally Henry.

The emissaries reached Reading. As credentials they brought the keys of the Tower of David and the Kingdom’s royal standard. According to some English chroniclers, they offered the Kingdom itself to Henry. Perhaps they did. (The ambassadors were reworking a performance already presented to Philip of France. One French chronicler later derides Heraclius: he was offering the keys to any prince he met.) The Kingdom of Jerusalem was in desperate straits; and behind the pageant may have lain hopes for a subtle solution: to side-step Jerusalem’s factions; and instead to secure one — any one — of Europe’s leaders as king. 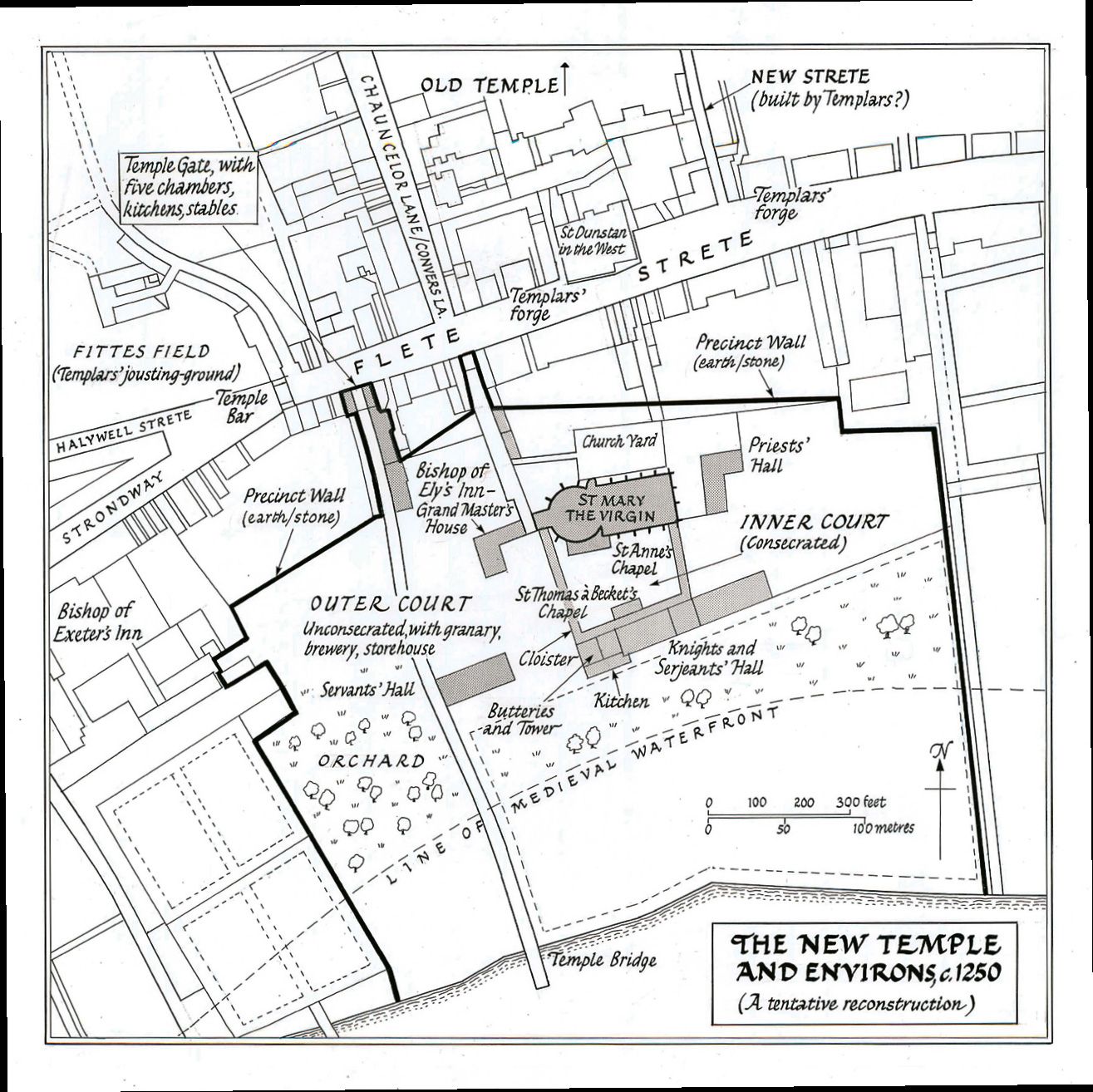 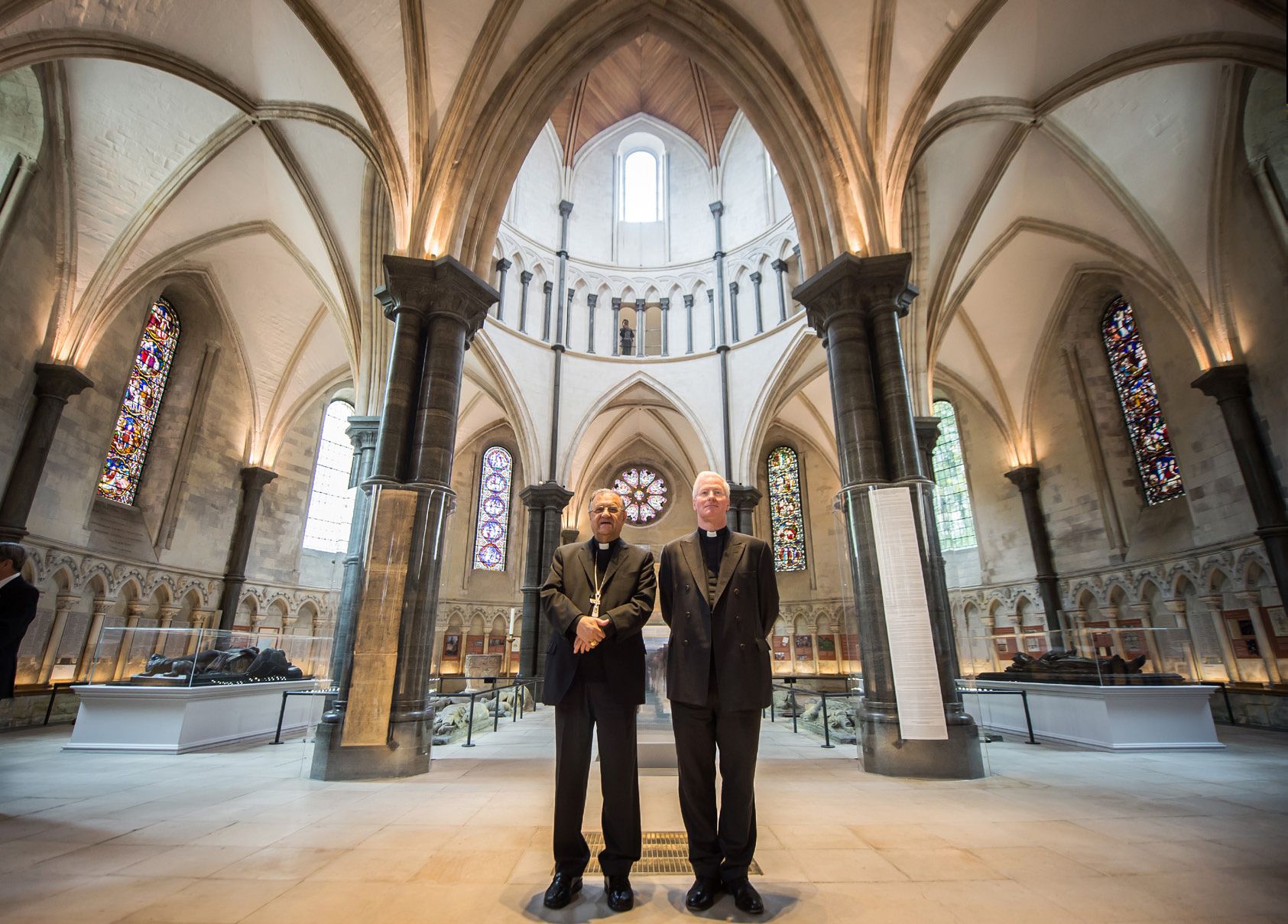 Patriarch of Jerusalem (left) and the Master of the Temple, Temple Church, 2014

In summer 2014 the current Patriarch of Jerusalem was in London to call attention to the plight of Christians in the Holy Land and throughout the Middle East. It was a privilege to welcome His Holiness to the Temple Church, in the footsteps of his predecessor 829 years ago. The Patriarch apologised wryly for this long delay, admitted that the Patriarchate had been quite busy with local affairs, asked for the prayers of us all — and promised that he or a successor will be back before another eight centuries have passed.

Heraclius’ mission had failed. On 4 July 1187 the crusaders suffered a catastrophic defeated at the Horns of Hattin, and on 2 October Saladin occupied Jerusalem.