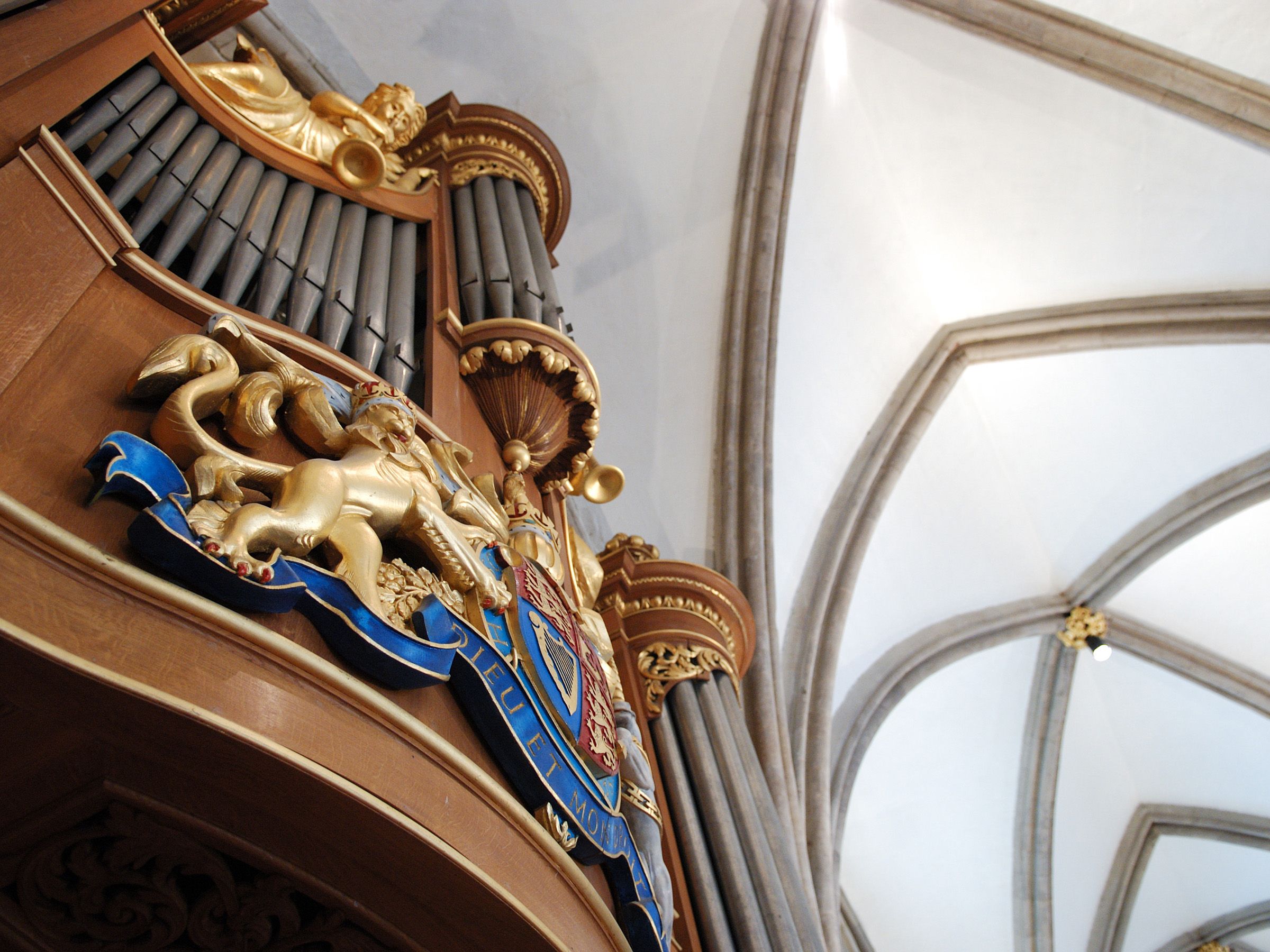 We are very grateful to our performers for giving their time and skills for free. Please give generously to the retiring collection to help cover the expenses of the series. Thank you.

All the recitals will be live-streamed on the Church's YouTube Channel. Please see below for the direct links

No recitals in August and September

“He is, without exaggeration, an extraordinary artist, whose humanity shines in the impeccable artistry that flows from his hands...” (Hans Zimmer, award-winning composer)

Roger Sayer is at the forefront of British choral and organ music. A former organ student at St Paul's Cathedral, Roger was Prize Winner at the 1989 St Albans International Organ Competition and won all the organ prizes at the Royal College of Music. Since then, he has been constantly in demand both as a recitalist and accompanist and his playing takes him to many parts of the world.

His recent tours and events have included recitals in Italy, Germany, Holland and Denmark, a major tour of Australia, a live recital at Temple Church broadcast on BBC Radio 3, opening the 2018 Summer Organ Festival at Westminster Abbey and the release of two new recordings for Priory and Signum Records.

Roger Sayer's work as organist has also extended into the film world, with his most recent performance as organ soloist for Hans Zimmer's Oscar-nominated score for the motion picture Interstellar. Roger later went on to perform the work live with composer Hans Zimmer in a special concert at London's Royal Albert Hall, which was attended by the film's director, cast and supporters, including Christopher Nolan, Jessica Chastain, Professor Brian Cox and Professor Stephen Hawking.

As a recording artist, Roger has released a number of CDs of solo organ music. His latest recordings, The Complete Organ Sonatas of Josef Rheinberger and The Grand Organ of Temple Church, have received several 5* ratings and outstanding reviews. The Grand Organ of Temple Church has been recommended on MusicWeb International: ‘Roger Sayer’s playing has a vitality and vibrancy about it which positively exudes brightness and clarity of thought.’ His Rheinberger CD was Recording of the Month on MusicWeb International: ‘Roger Sayer proves himself to be an apt interpreter of Josef Rheinberger’s wonderful music; his playing is superior to that of Jürgen Sonnentheil on CPO in the two sonatas that he performs on his disc. The excellence that Sayer shows in those two sonatas is continued on into the other eighteen, so much so that I hope that Priory gives him an opportunity to record further recitals of the composer’s music.’

In addition to his organ playing, Roger Sayer is also an acclaimed choral director with some of the UK's finest choirs. After founding the Rochester Cathedral Girls’ Choir, Roger joined Temple Church in 2013 as Director of Music and has since created an impressive portfolio of broadcasts, concerts and recordings. The choir’s most recent CD, The Temple Tradition, received a 5* review in Choir and Organ Magazine: ‘The richly voiced young choristers of the Choir of the Temple Church are a joy to listen to, their unison singing nothing short of miraculous, and Roger Sayer draws from his singers outstanding phrasing and subtle nuances of tone’. Under his direction, Temple Church Choir has broadcast numerous times on BBC Radio 3 and Classic FM, and undertaken several international tours of the USA, Holland, Singapore, Australia and Germany. In 2017, Roger conducted the choir at the St Albans International Organ Festival 'Three Choirs' concert, alongside the choirs of St Paul's Cathedral and St Albans Abbey, and set up a new youth choir of at Temple Church.

Outside of Temple Church, Roger Sayer worked with the London Symphony Chorus for ten years as Accompanist and Deputy Chorus Director, collaborating with many of the world's leading conductors and soloists. He is regularly invited to be external examiner at the Royal College of Music organ department.

Roger has a YouTube channel where a new recording is released every Monday.

Charles Andrews has been Liturgical Organist of the Temple Church since 2019. He studied at the Royal College of Music with David Graham and Sophie-Véronique Cauchefer-Choplin, with the aid of a Douglas & Kyra Downie Award. Before studying at the RCM Charles held a Michael James organ scholarship at Rochester Cathedral. From 2011-16 Charles was Associate Director of Music at All Saints, Margaret Street in the West End of London. Plans for the near future include recording organ works by former Temple Church organists Henry Walford Davies and George Thalben-Ball and their associates.

Thomas Allery is passionate about teaching and encouraging students to develop a range of musical skills from a young age. He has created numerous educational resources which link performance with musical theory, aural awareness, keyboard understanding, and harmony to encourage the development of a well-rounded musician. He is regularly developing new educational materials which encourage an understanding of musical theory through the repertoire that students are performing.

He is organ tutor at City of London School and Radley College, and teaches basso continuo at the Royal College of Music.

Having studied at Oxford University and the Royal College of Music, Thomas recently completed an Artist Diploma in harpsichord at the Guildhall School of Music and Drama where he studied with James Johnstone and Carole Cerasi. From 2014 – 19 Thomas was Director of chapel music at Worcester College, Oxford and was also Assistant Organist of Magdalen College. Thomas is in regular demand as a continuo player on organ and harpsichord, for chamber music and orchestral repertoire. He is the regular continuo player of award winning chamber ensemble, Ensemble Hesperi. With this group, he has performed at numerous leading UK festivals, presenting the programme ‘The Pheasant’s Eye’ which showcases Scottish Baroque Music with highland dance. In 2014-15, Thomas was a Junior Fellow in Harpsichord and Continuo at the Royal College of Music and was a Britten-Pears young artist as a continuo player, performing Bach cantatas under the direction of Philippe Herreweghe at Snape Maltings, in 2019. He is currently undertaking research into historical continuo treatises from the seventeenth and eighteenth centuries, and exploring how they can be used in keyboard education today.

Jeremy Lloyd studied at the Royal Academy of Music with Susan Landale, David Titterington and Clive Driskill-Smith. Whilst at the Academy, he was awarded the C H Trevor Prize and Gladys Aitken Award, and performed in masterclasses with Olivier Latry, Bine Bryndorf and Eric Lebrun. Jeremy combined his studies with organ scholarships at Methodist Central Hall, Westminster and the London Oratory, where he accompanied and assisted with the Oratory Junior Choir and played for the major Latin liturgies with the Senior Choir. After graduating from the Royal Academy of Music with a first-class degree, Jeremy embarked on a two-year organ scholarship at Peterborough Cathedral, followed by a further two years at York Minster as the Assisting Organist.

Jeremy is a Fellow of the Royal College of Organists and holds the LRAM teaching diploma from the Royal Academy of Music. He has performed live on BBC Radio 3 and 4 and has given organ recitals across the country in venues including the Cathedrals of St Paul, St Edmundsbury, Westminster and Southwark, as well as Westminster Abbey and Reading Town Hall.