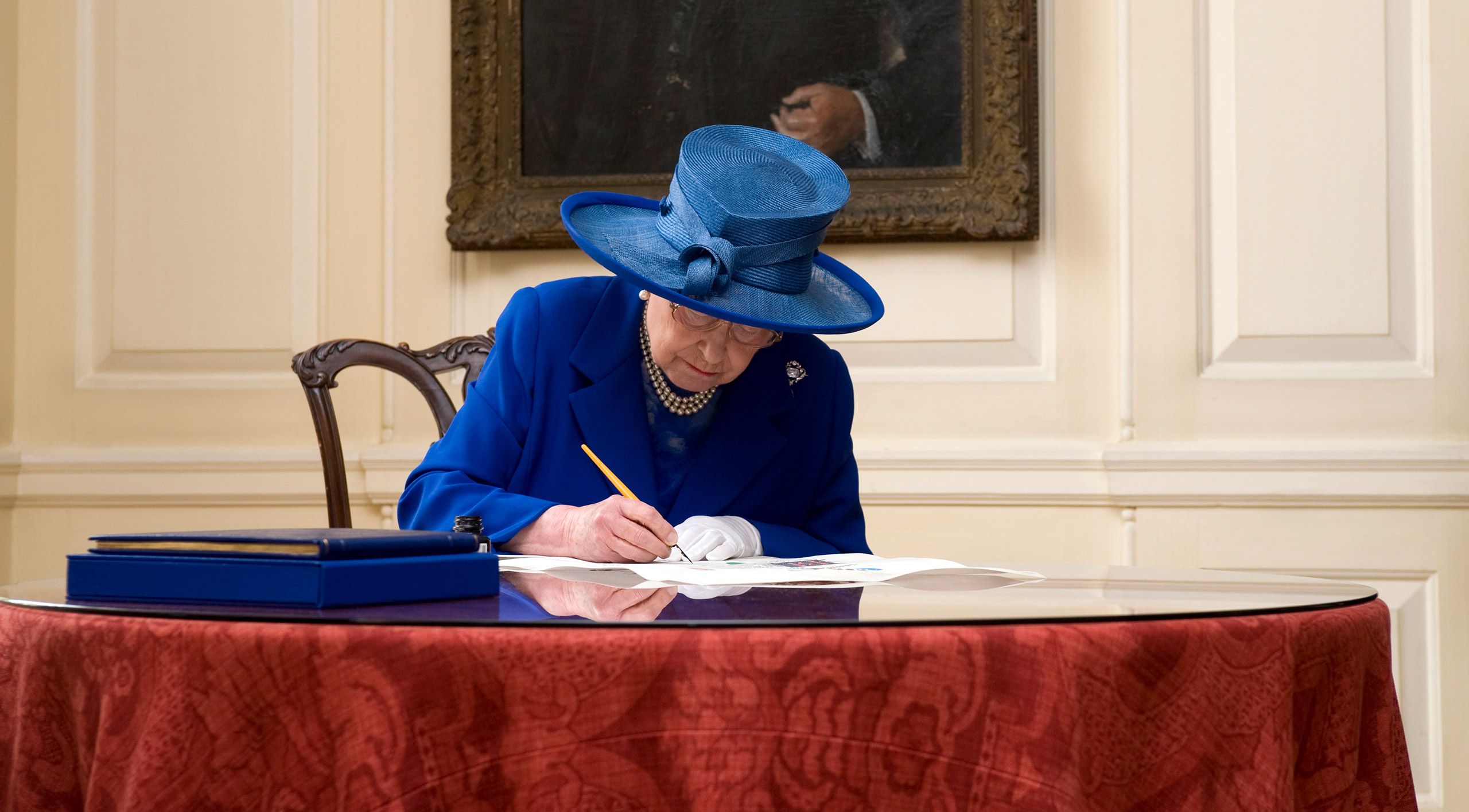 The Temple Church was built by the Knights Templar. Here in the Temple the Templars had their Church, two Halls, cloisters and domestic buildings, leading in the 12th century straight down to the River Thames. The Church was in use by 1163. The Round Church was consecrated in 1185, the Chancel in 1240. Henry III had planned to be buried here; this may account for the Chancel’s design as a Hall Church with a wide central aisle (in which the funerary monument would have been built) and side aisles of the same height.

The Templars were suppressed, 1307–14. The lawyers of Inner and Middle Temple were well established in the Temple in the 15th century, and on 13 August 1608 their occupancy was secured by the grant of Letters Patent from King James I. These Letters entrusted the Church and its maintenance to the Inns. The Inns continue to maintain and manage the Church. It is thanks to the Inns’ care, over four centuries and more, that the Church is so beautiful a building, filled with some of the finest church-music in London.

The Church’s prime responsibility is to care for the Inns’ members and their families, and for all those others — barristers, and the staff of the Inns and of Chambers — who work in the Temple. The Inns themselves want the Church to be, as well, outward-looking; and we are delighted to welcome to our services, concerts and events, and simply to quiet visits when we are open, all those residents of London and visitors from all over the world who look forward to being here.

HRH The Queen visits the Temple Church on 24 June 2008 to mark the issue of new Letters Patent. Her Majesty receives a bouquet from Amelia Parry, a young member of the Sunday School, and meets some of the Choristers of the Temple Church.

In 2008 Her Majesty graciously commanded the issue of new Letters Patent confirming the grant of the Temple, including the Temple Church, to Inner and Middle Temple. Her Majesty continues to be the Visitor of the Church, which enjoys the status of Royal Peculiar.

Here are some extracts from the Letters Patent, in a translation made in 2008 by Master Sir John Baker of Inner Temple:

Whereas our realm of England, having flourished mightily for so many ages in the arts of peace and war… is acknowledged with good reason to owe a great part of its happiness to the ancient laws proper to this realm, proved through a long series of ages and being particularly adapted to that populous and warlike people and approved by continual experience, and whereas the Inns of the Inner and Middle Temple, London, having long been among those four most celebrated colleges of all Europe continually filled with persons studious and learned in the aforesaid laws, have for a long time been dedicated by the liberal bounty of our forebears, as Kings of England, to the use of those studying and professing the said laws, unto which, as to the best seminaries of instruction and upbringing, a great many young persons of honourable background, excellently endowed in mind and body, have daily flocked from all parts of this realm, and from whom by reason of their highest merits many have been advanced, both to arduous positions in the state and in the administration of justice, wherein they have provided high examples of prudence and integrity, to the honour of the said profession, the adornment of this realm, and the no mean benefit of the whole commonwealth, as is to us abundantly manifest:

Know ye therefore that we … have of our especial grace, certain knowledge and mere motion given and granted, and by these presents for us, our heirs and successors do give and grant unto our well beloved and faithful [here follow the names of the grantees] our aforesaid Inns, and the capital messuages and buildings with the appurtenances, called or known by the name or names of the Inner and the Middle Temple, or the New Temple, London …

The Letters specified, in relation to the Inns, messuages, houses, buildings, chambers and other premises, that:

… we will and by these presents for us, our heirs and successors do strictly command [that the Inns] shall serve for the accommodation and education of those studying and following the profession of the aforesaid laws, abiding in the same Inns, for all time to come.

And the said [grantees], for themselves, their heirs and assigns, covenant with and grant to us, that they will well and sufficiently maintain and keep up the aforesaid Church, the chancel and the belfry of the same, and all other things in any way appurtenant to the said Church, in all respects and for all time to come, at their own expense, for the celebration there in perpetuity of divine service, the sacraments and sacramentals, and all other ecclesiastical offices, ministries and rites whatsoever in so far as it is befitting and has until now been used …

About The Temple Church 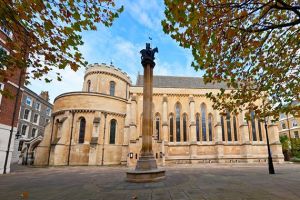 About The Temple Church The Inns 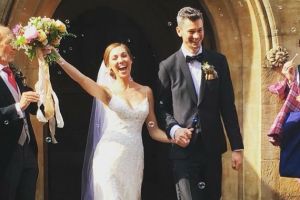 At Queen Victoria’s Diamond Jubilee service in 1897 The Queen was too frail to attend the State Service in St Paul’s; at its end, therefore, the choirs processed out onto the Cathedral steps and sang a second, shorter service for The Queen while she sat in her carriage. The Temple Church Choir led the procession of choirs out of the West Door. In this detail of A. G. Gow’s painting of the scene, our choristers and choirmen are in position at the northern end of the steps, on the left of the picture. The Inns conducted their own celebration — including a service in the Church — on 13 July 1897.

In the summer of 1935, at the celebrations of King George V’s Silver Jubilee, the choir sang at the Jubilee Garden Party in Inner Temple, at their own concert at Queen Mary Hall and at the Command Performance, devised by Sir Henry Walford Davies, at the Albert Hall. The choir first wore scarlet cassocks in Westminster Abbey at the Coronation of King George VI, 12 May 1937. 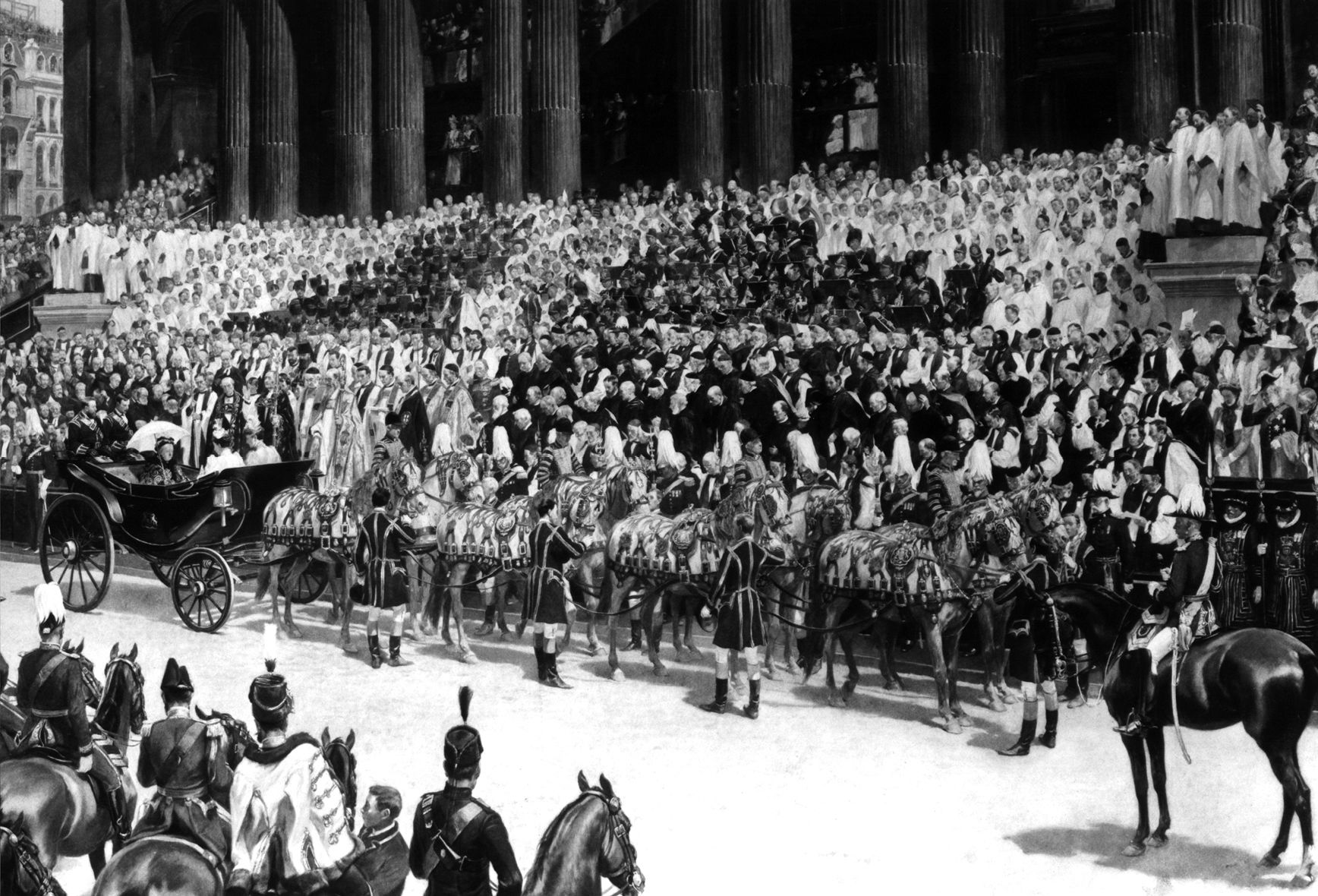 MARKING THE LETTERS PATENT AND THEIR QUATERCENTENARY

To mark the grant of the Letters Patent, in 1609-10 the Inns presented to the Church two silver gilt communion cups. The Calendar of Inner Temple Records lists: ‘To Terry, a goldsmith, for two new communion cups for the Temple church, abating of the exchange of one old one, 13 li. 12s. 2d.; the Middle Temple paid one half, 6 li. 16s. 1d. … For a black leather case for one of them, 4s.’

To mark the Quatercentenary of the Letters Patent, Inner and Middle Temple have commissioned for the Temple Church a stained-glass window from Caroline Benyon, one of the UK’s leading glaziers. The window is installed in the central bay of the Church’s south side. On the left- and right-hand lights are the symbols of the two Inns: the Pegasus of Inner Temple, and the Lamb and Flag of Middle. In the centre light, the scales of justice are suspended from the centrally positioned sword. On either side of the Crown are symbols from the Coat of Arms of King James VI of Scotland and I of England: the three lions guardant of England and Scottish lion rampant; the Irish harp and the fleur de lys of France are below. Beati pacifici, ‘Blessed are the Peacemakers,’ was the King’s motto. The Commonwealth symbol and the stars of the European Union are incorporated near the base of the design. The window was dedicated by the Dean of the Chapels Royal, The Rt Rev Richard Chartres, at Choral Communion on Sunday 27 April 2008.

Two silver gilt communion cups presented to the Church in 1609. 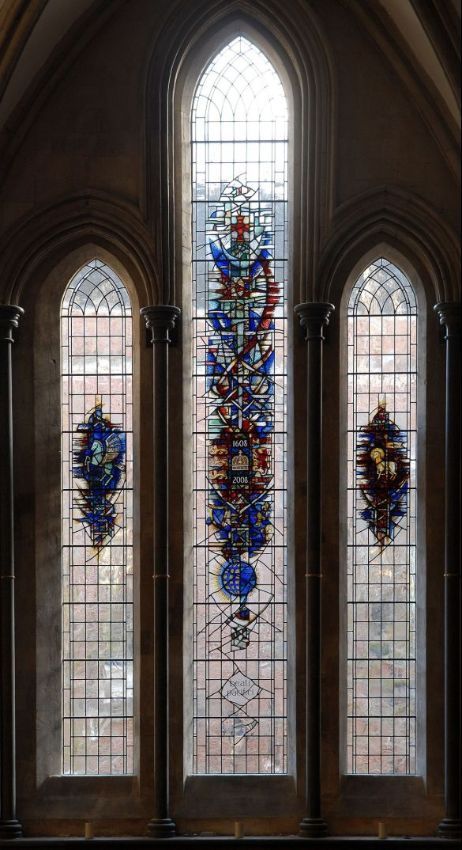 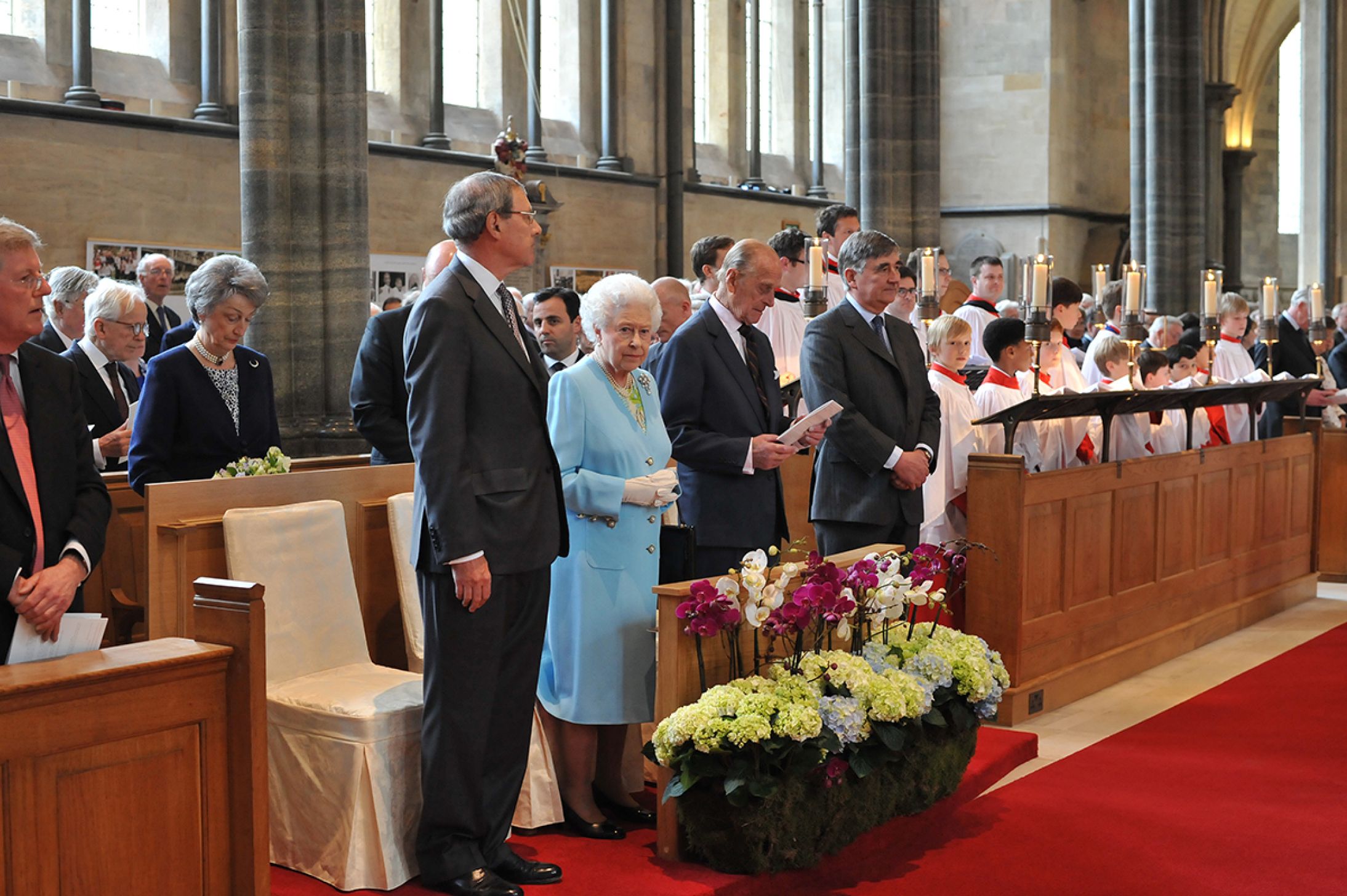 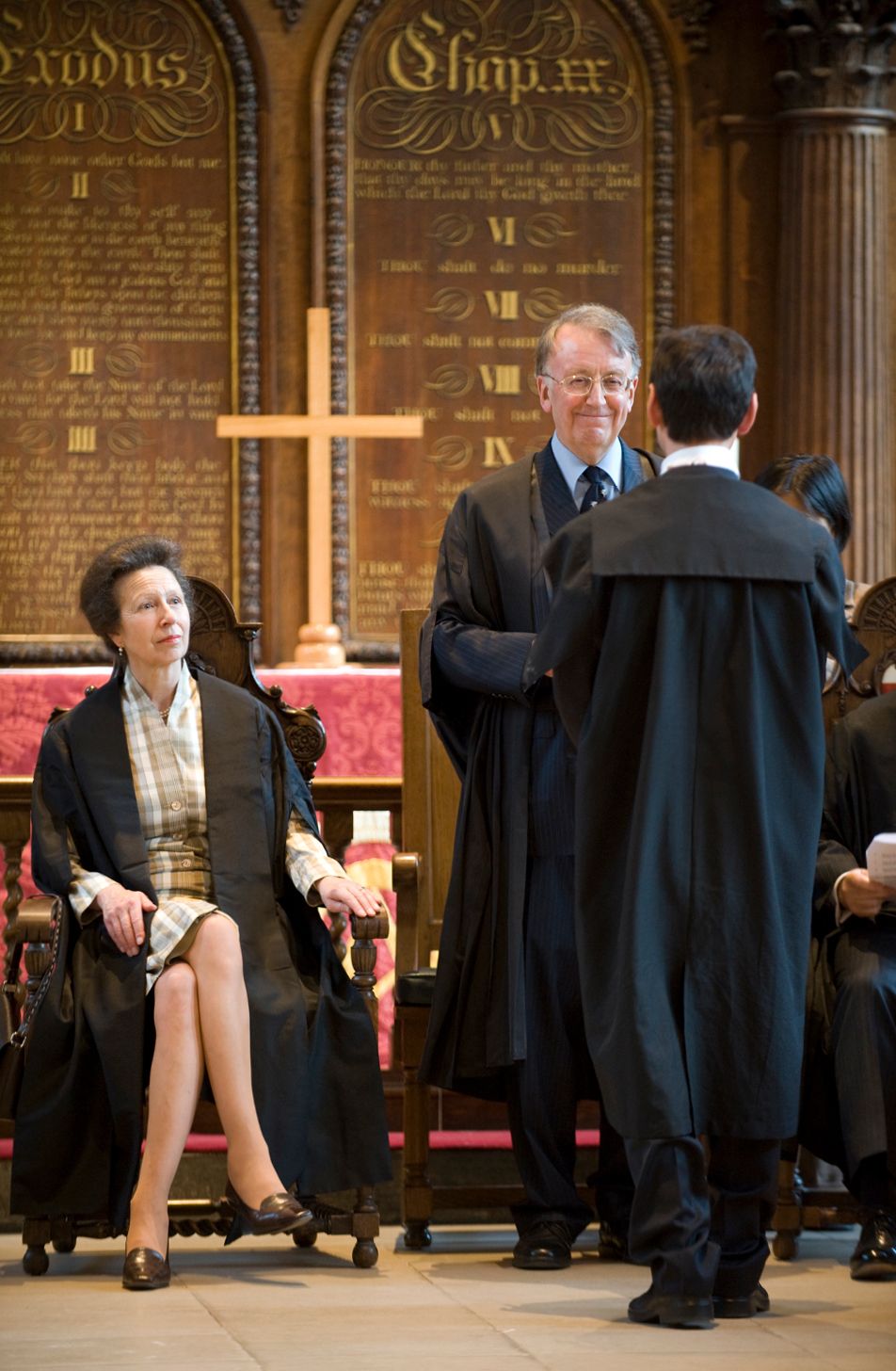 24 July 2008, Inner Temple Call Night in the presence of Her Royal Highness The Princess Royal 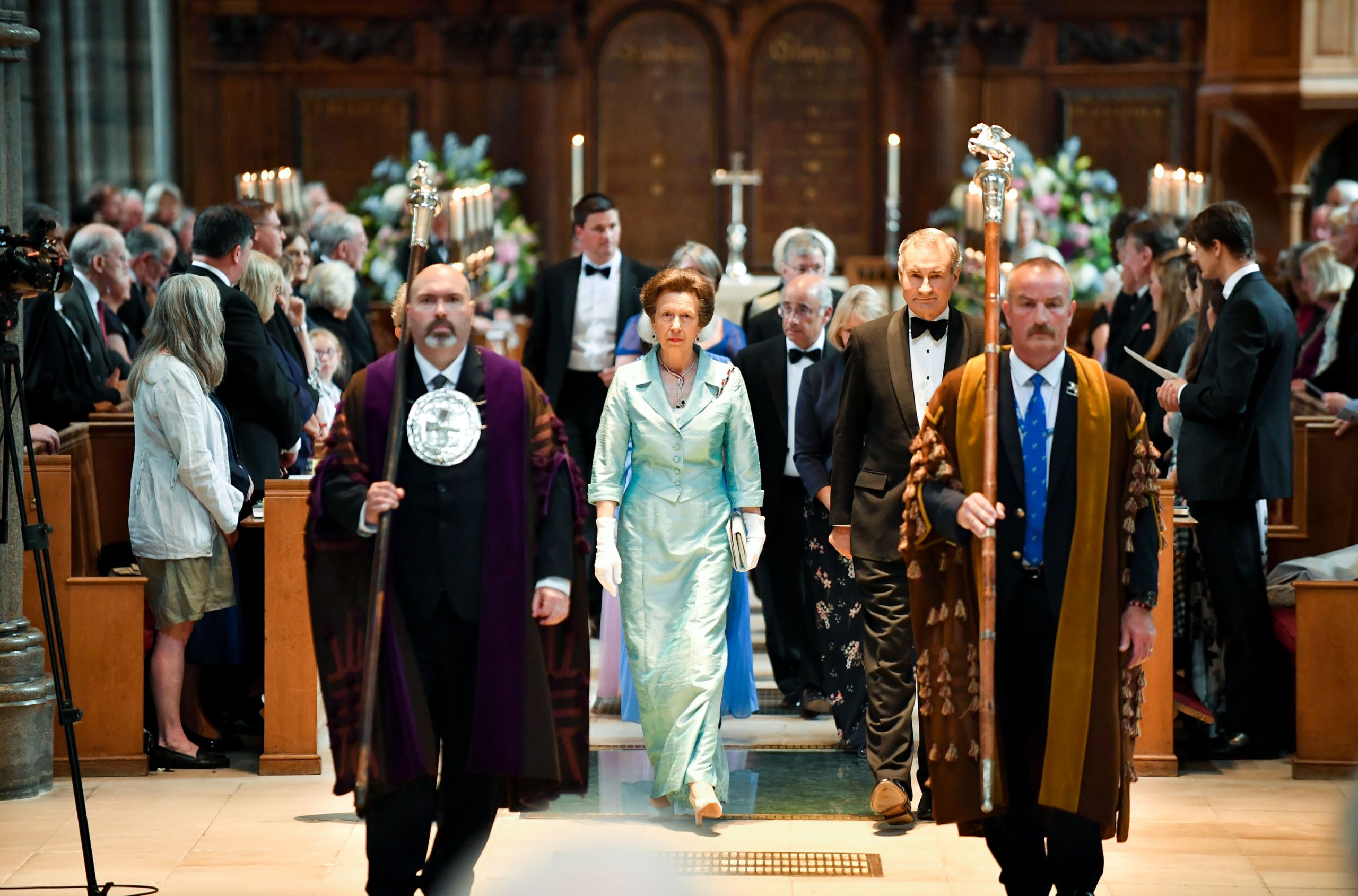 17 July 2019, Evensong to Celebrate the Amity between the Inner Temple and the Middle Temple in the presence of Her Royal Highness The Princess Royal