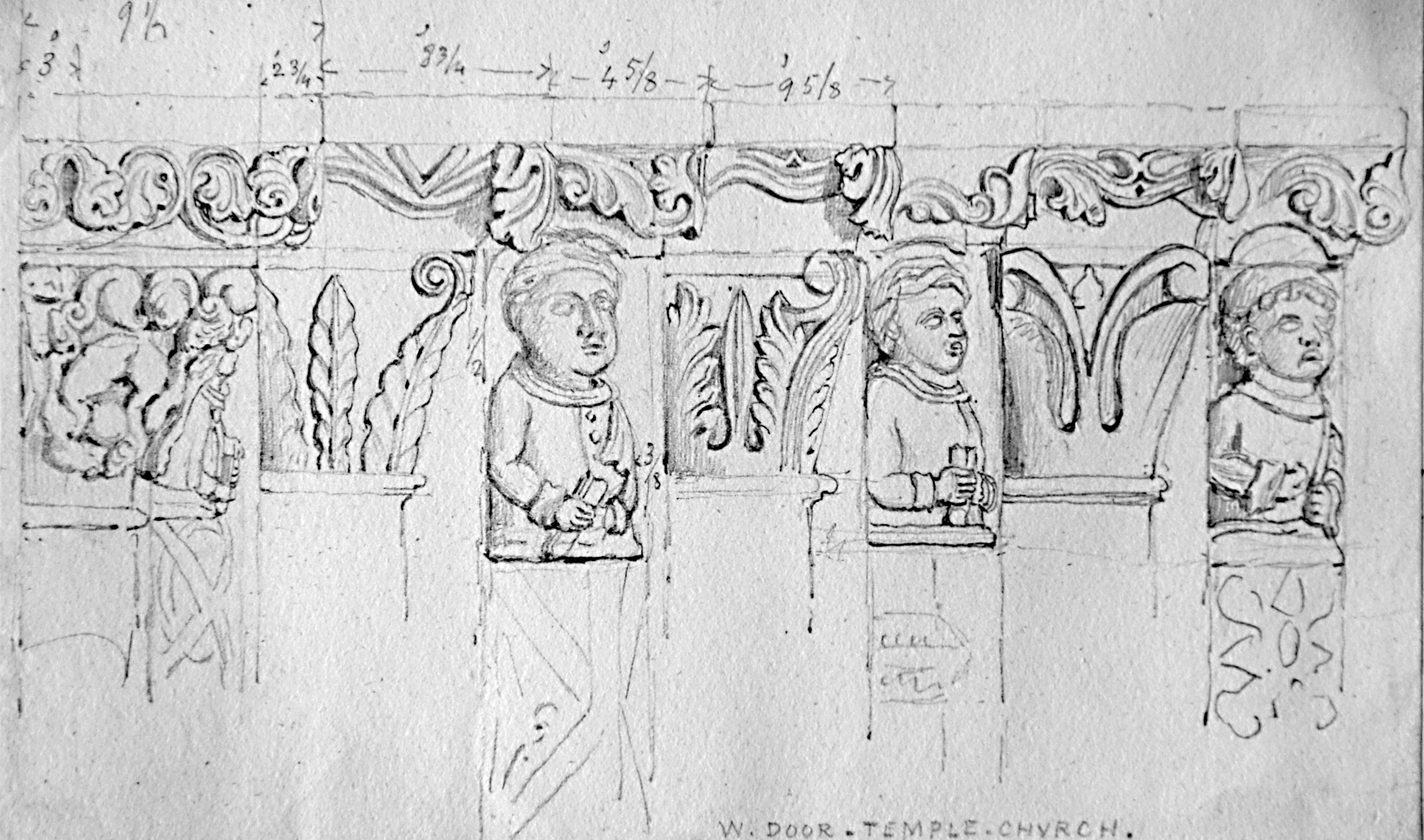 The Temple Church was last subject to major repairs in the 1950s.  It had been damaged in the Blitz, and was elegantly and austerely restored by Walter Godfrey.  Seventy years later, however, the Church is ill-equipped to house its expanding role within the work and vision of the Inns.  We are at work on a major programme of Restoration and Renewal.

The post-War repairs left untouched and unused the Great Norman Doorway of 1163 and its spectacular 12th century carvings; the carvings are now seriously in need of repair, and the Doorway’s whole approach needs to be reconfigured and beautified, to make the Doorway once more the principal and inspiring entrance to the Church that it was designed to be, with the majestically beautiful view intended by the Templars, along the axis of the Church through the Round and into the Chancel of 1240.

Since the 1950s, the roles of the Inns and of their Church have changed out of all recognition.  The Inns now want their Church to embody and promote their own outward-looking service to jurists and to visitors from all over the world.  They want this jewel in the middle of London – and, just yards from Fleet Street, in the middle of the Temple’s restorative, therapeutic calm – to be visited and valued by a large number and wide cross-section of London’s residents and workers and by anyone with a personal, professional or potential interest in the Rule of Law.

To equip the Church for such ongoing and expanding work over the coming century, we will transform the modern ‘envelope’ around the Church’s historic core: all the front-of-house and back-of-house facilities will be re-configured and modernized to make the Church as welcoming and lovely a place to visit as any in London.

The Church will then remain – over 800 years since Magna Carta – at the heart of legal and constitutional London, and so of the promotion of the Rule of Law worldwide.

For the present plan to be optimised, the ‘envelope’ surrounding the Church’s lovely interior needs in two ways to be transformed. The West Doorway, with its view through the Round along the length of the Chancel, will become the principal, all-year entrance to the Church for the congregations, audiences and  visitors at the Church’s whole programme of services, concerts, events and exhibitions; and the present (confined and dilapidated) ‘back-stage’ facilities will need to be radically  re-designed and improved, with the choir-school removed to a larger and more suitable space.  All this has been recognised for some time. Two changes have brought the potential benefits of such a plan into sharp focus.

First, the West Doorway itself, with its once-lovely carvings, has seemed to be irreparably damaged. Nobody would propose the replacement of 12th century stone, however badly degraded it might be; the Doorway could never, it seemed, be more than impressive but forlorn. Our own research, into the stonework, however, has shown that all the well-preserved, crisply-carved stones are 12th century; and all the badly degraded stones are replacements, installed in a repair-campaign of 1842. To re-beautify the Doorway now would be to do supremely well what was (with the best intentions) badly done – with poor stone wrongly laid – in the 19th century. It is now possible to envisage the Doorway as once more the fittingly spectacular, uplifting entrance to its own 12th century rotunda and so onwards to the 13th century Chancel.

Secondly, the Inns plan to make available such  musical and educational benefits as they offer to their gifted and talented boy-choristers to a number of similarly musical girls and young  women too. At this point the present single-room ‘choir-school’ in a subterranean corridor ceases to be merely inadequate and becomes a prohibitive obstruction to the scheme. The time has come to find a new home for the choir-school; the facilities in the northern corridor can then be reconceived and radically improved.  And at this point all the work and expense on the West Doorway and its environs will be fully vindicated: by a greatly expanded programme of concerts and other events for an enhanced and wider-reaching public benefit.

The choir-school can be re-sited in the three lovely, airy gables of the chancel’s large roof- space. There is room in the roof too for all the Church’s administrative offices, bringing the Church’s whole operation (vividly) under one roof and instantly enhancing the co-ordination  between its different parts.
We are exploring the installation of the appropriate environmental technologies to  make the Church net zero-carbon.

In prospect: The West Porch after the planned work: glazed in and warmed as a lobby, lit inside and out as a beacon and invitation. Shown before the planned cleaning of the stone